The artist selected to represent the Principality of Andorra on the 57th edition of La Biennale di Venezia, Eve Ariza, studied Fine Arts and predominantly ceramics at the École Supérieure d’Art in Limoges (France).

Murmuri reflects on a universal language and takes an in-depth look at constantly changing material and the origens of shapes and sounds. Reconnecting with the pottery tradition, Eve Ariza develops and multiplies the millenary shape of the bowl, one of the first ever man-made creations which had a specific us. The artist alters the base of the bowl to make it look like a mouth which lets out the valuable murmurs. The utilitarian essence of the object vanishes and its simple shape becomes a true symbol of the connection human beings have with each other.

Murmuri brings us back not only to the original concept of pottery, but also to the sensual, tactile, political and subversive aspects of other works that have preceded it. In a way, Eve Ariza’s work processes influences and concepts and, at the same time, reassesses the history of pottery to make it her own.

Apart from the importance of the material, Ariza’s technique is in itself an action that gives meaning to the work in general. The work consists of approximately 9,000 bowls, shaped one by one, by the artist’s own hand. The creation process was therefore extremely physical, lasting some 6 months, and was doubtlessly monotonous. We can imagine that, to a certain extent, the artist had to accept the tempo the material itself dictated. Ariza set up her workshop, just to create these murmurs, in the small town of Sainte Colombe, France. In an almost totally natural setting, she focused on turning each pile of soft clay into a transmitter. Like an act of quiet rebellion in a world of contemporary art where frenzy reigns, Ariza allowed herself the luxury and felt the overriding need to listen to and experience the rhythm the clay imposed on her.

When the murmurs are placed on a vertical support structure, the magic begins. The work turns into a sensorial experience as if you listen closely enough, each bowl reveals its own natural murmur. Freed from traditional narrative content, the work immediately invites the spectator to a physical dialogue. Its size, which we could almost call architectural in nature, later makes way for the delicateness of each bowl-murmur. The lines modelled in each murmur’s interior by the potter’s wheel undoubtedly reminds us of the resounding waves that are dispersed to infinity. A reminiscence of the ‘centre du suspens vibratoire’ which Stéphane Mallarmé spoke of. It is that first, purely poetical vibration which all human communication sprang from. Ariza places the spectator at the centre of that original vibration, which comprises all the matter of the universe. It is a hardly perceptible vibration that encourages silence, meditation, even though it is right in the very centre of the hustle and bustle surrounding the Venice Biennale.

The function of the contemporary artist is to highlight current problems, open up our consciousness and elevate spirits. Throughout her career, Eve Ariza has attempted to make people reflect on human communication and the difficulties that this is experiencing in our post-consumer society. Through pottery, as well as through activist happenings, she has often criticised the Andorran microcosm and its image solely as a commerce-oriented country. Murmuri is conceived as one more stage in her struggle against ‘blah’, in other words, against excessive consumption of images and sounds that seem to be turning more and more into the sole basis of our societies. In this sense, it is a bitter criticism of that ‘liquid society’ described by the philosopher Zygmunt Bauman, in which the individual no longer desires to become part of a community or an established order, but has an insatiable desire to satisfy his own whims. 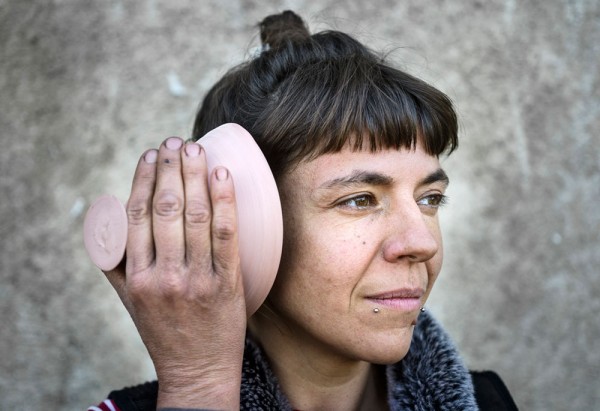 I decided to put myself in the hands of the clay and a potter’s wheel for several months to shape murmurs, one by one, none of them the same, and listen to them. Clay has a voice and talks to us. I listen to it, to them. You are one; it is the other. We are all represented in it. The clay decided
how quickly I should stretch it. Some types need more turns of the wheel; others, fewer. Day after day the same.

From the wheel I see and smell nature and the seasons turn like the wheel. As the wheel turns and actions are repeated, there is occasionally pain. My body is not used to it, I don’t stop and
keep going. Of the murmurs, many are finished, and many more could be made.

The wheel centres me, and I centre the clay. I seek the axis because without it there is no harmony. Without the axis the murmurs do not spring forth. The fire fixes them in time and gives them the colours of the skin, all different, like the sun.

My intention is that each murmur should resonate with the world through the Venetian experience.
Everything is very simple, like the wheel that turns.